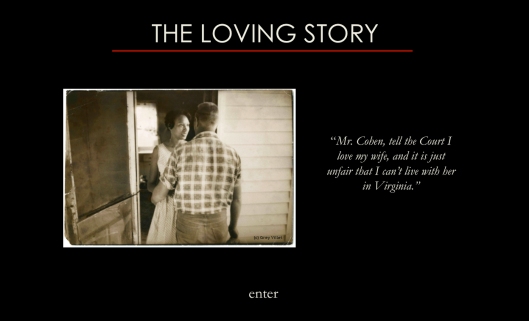 The Loving Story: HBO on Tuesday at 9

I spend my nights the way most New Yorkers do, embracing my apartment’s quietude, clutching its peacefulness to me the way an emphysematic does their oxygen–the nights are precious because the days are filled with so much noise and shouting and crowded sidewalks and no seat on the subway and people richer than anyone needs to be and those poorer than any nation should allow.  You learn a lot of zen, walking around this town.  My nightime quietude is also fragile; it’s nothing more than a decision reversible at any time, which renders it lovelier.  There’s loads I could be doing out at night, in the Naked City.  My apartment is on the 16th floor, and sometimes the night skyline beckons brightly.  Sometimes I remember Updike’s quote about New York being the only city which, even when you’re in it, glitters at a distance.  Sometimes I grab my coat and go out to see the creative, the fabulous, the city’s blind rush towards the future and (far more interesting to me) its reflection on the past.

Tuesday night my friend Courtney, who works for a producer and with whom I’ve worked on several film projects, invited me to a reception and screening of HBO’s new documentary, The Loving Story.   I remember being taught about the Lovings in school, but didn’t remember much about them other than that they were a mixed-race couple who were jailed and then exiled by the State of Virginia, and who in 1967 took their right to be married to the Supreme Court.   Sounds like the stuff of pure Capra-corn, and actually it was–but with a tender, unselfconscious gentleness to the story Capra couldn’t  have matched.

To start:  The reception, which was at the International Center of Photography.  I’m anyone’s for a mini-quiche, so I went in happy to see waiters smoothly circling, with expensive and tiny nibbly things on trays.  Excellent.  Once I’d downed a netful of shrimp, a couple of mozzarella tomatoes, several mini potato nests and a diet coke, I finally focused on other things and noticed. . .an enormous 20 foot-long gun hanging over my head from two slender wires.  A 21st century sword of Damocles.  And on the wall there was one name, writ large: WEEGEE.  The reception was being held in the ICP’s exhibition of Weegee photographs from the early 40s; the photographs that inspired the movie The Naked City.  A 1948 film noirer than espresso, shot on locale in New York. 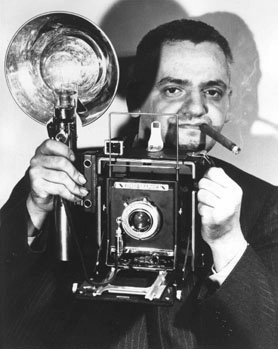 Weegee was a photographer for the NY tabloids in the 30s and 40s, who revolutionized tabloid photography by not only taking pictures of the gruesome events he covered, but of the people surrounding them.  In turning his camera on onlookers, some highbrows insist, Weegee made us complicit in our own rubbernecking.  I don’t agree with that; I think the human face is more interesting to look at than a corpse, particularly when it’s looking at a corpse.  The exhibit contains hundreds of Weegee’s inspired black and white photographs, and a mock mid-twentieth century bedroom that I felt I’d seen in a hundred noir films (it’s exactly like the one Burt Lancaster is sweating in at the beginning of The Killers, as he waits for his assassins).   For someone who wants to see what Prohibition, the Depression, and a World War do to a people, Weegee: Murder is my Business is a great place to start.

The Loving Story was screened at HBO across the street. I had to walk nearly a block, plus ride an elevator, so you can imagine how pleased I was to find they’d set out post-quiche treats for my weary delectation:  Coffee, cookies, mini-cupcakes.  What with one thing and another (namely; coffee, cookies, mini-cupcakes), Courtney and I got into the screening just in time.  As the lights went down, I developed a righteous annoyance at a girl across the aisle who kept incessantly texting whilst flipping her hair over her shoulder again and again.

The Loving Story is not only a beautifully shot and orchestrated documentary, on a subject that its director Nancy Buirski says has never been covered–it’s a film that should be seen because it contains footage accessible only through one source in the past– Hope Dryden, one of the only camera people Mildred Loving trusted into her life.  The old footage of the Lovings, raising their family while being persecuted by Virginia sheriffs and bringing their lawsuit to the state courts and then to the supreme courts, is an astonishingly moving view of a world that seems hundreds of years gone by.  The Loving’s small house, with its sparse furniture and central wood burning oven, doesn’t even contain a phone.  It just contains a family, quietly going about its business as the hawks circle above.  The film cuts from footage of the Lovings, at home and at court, to discussions with their attorneys and their neighbors at the time.

4 Most Surprising Things about the Movie:

1. I was surprised to discover that the Loving’s neighbors didn’t particularly seem to be bothered by this interracial marriage: no one reported that the Lovings had quietly returned to Virginia, though it was illegal for them to do so.  Their families weren’t annoyed by the marriage.  It was the law enforcement officers and, most particularly, the State of Virginia, who objected.  In other words, the State was going to huge trouble and expense to enforce laws its citizens didn’t care much about.

2.  The lawyers in the case of Loving vs. Virginia were so young.  They were both less than 3 years out of law school, and had been given the job as a sort of favor to the ACLU  (whom Mildred contacted after Robert Kennedy advised her to do so.  She’d written him a letter–and he responded!).  These men were incredibly dedicated, hardworking, and respectful of the Lovings–but they were hugely helped by the fact that, according to the Loving’s attorney Philip Hirschkop, “the opposing attorney never wanted to argue about the rights of the people, only about the rights of the State.”

3. While the Lovings won their supreme court battle in a unanimous decision by the Supreme Court, and the anti-miscegenation laws were banned across the country, Alabama didn’t comply with that ruling until 2000.

4.  This story was so moving, and the Lovings so quietly dignified, that the hair-flipping texting girl across the aisle was weeping by the end of the movie.

The Loving Story is probably the best thing someone could do with their Valentine’s Day next week.  Far better than long waits in harried restaurants followed by enforced carriage rides behind miserable horses–stay home!  Eat quiche! Avoid the faux romance out there and spend some time with this luminous, dignified story of people who endured 9 years of jail, exile and poverty, just so they could live in their home as a family.

Note:  Just today I read that 71% of college students think gay couples deserve the right to marry–up 13% or so in the last 2 years.  Roll on, progress!

The Loving Story airs on Tuesday, February 14th at 9 pm on HBO.