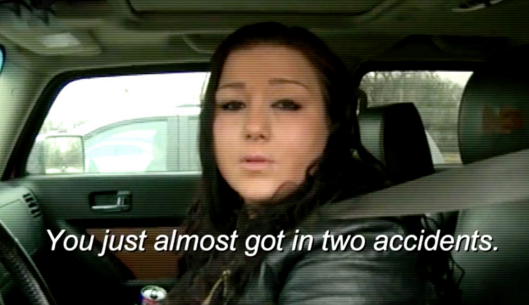 A&E struck gold back in 2005 when they launched the Emmy-winning Intervention, a docu-style series following alcoholics, drug addicts and those struggling with other disorders from the depths of their addictions through a staged intervention and, if all goes well, off to treatment. Though briefly canceled in 2013, the show was revived just a year later and is now continuing its 15th season. This was the 13th episode of Season 15 airing Sunday, July 10.

Alicia is a 29-year-old brunette from Staten Island whose accent harks straight back to MTV’s Jersey Shore—though she was probably too busy and bummed out to audition for that gig. She’s a long-term heroin and Xanax addict with a $1200 a week habit who states right off that “All I want to do is be fucking high, and I hate my life…if I had the balls, I would shoot myself.”

Instead she shoots herself up, and occasionally drops by the family plumbing business to “work,” i.e. pester her mother, Gina, for cash to buy drugs. Then she shoots up again and sits at her desk, giving Gina the joy of watching her daughter nod off while ignoring incoming calls. Perhaps, says Gina, Alicia thinks “stray cats will answer the phone.”

With one kohl-lined eye at half-mast, Alicia assures us, “I am 100% a heroin addict.” She nods off again, submerged in the opiate swamp, but pops back up just in time to chew a Xanax. At this point some info appears onscreen: mixing Xanax with heroin can cause respiratory failure.

Alicia’s a dab hand at obtaining money from Gina, but she is also a master shoplifter. As the camera scans rows of top-end hair products Alicia’s boosted from local shops, I am gobsmacked. How the hell does someone pull that off? Alicia must borrow Santa’s bag to haul that amount of Nexxus out of the local Ricky’s.

Gina was 16 years old (and sporting some fabulous 80s hair) when Alicia was born. The biological father didn’t stick around, and soon Gina married a stand-up guy named Joe. Alicia happily called him Dad, and the family grew when Gina and Joe had two more kids, Joe Jr. and Jillian. Gina loved dance, gymnastics and karate.

When Joe started the family plumbing business, Alicia handed out flyers and went with her dad out on his plumbing calls. The business thrived. The world’s full of crap and piping, and the family was flush with success.

Around age 15, Alicia began distancing herself from the family. Turns out her maternal grandmother, Cookie, had come up with a crummy little scheme. Why not introduce the kid to her biological father? Cookie secretly arranged this meeting, Gina states, because she was pissed Joe wasn’t giving her a split of the plumbing money. Alicia now believes that her grandmother is “not a nice person,” and refers to her biological father as a “sperm donor.”

We don’t encounter this charming guy, who encouraged his 16-year-old daughter to hang at his place during the school day with her friends, smoking pot. Then he introduced her to a 29-year-old dude who she began to date. This is when she first tried cocaine. She says it was a “once in a while fun thing,” but soon dropped out of school.

The same Goddamn thing that’s been happening all over this opiate-soaked country. Alicia was injured in a car accident, and prescribed opiate painkillers. After the doctor cut off her prescription, Alicia’s older boyfriend mentioned that heroin had the same effect. A statistic is shown: eight out of 10 people who use heroin have been introduced to opiates through painkillers.

Gina says, “By the time I knew something was wrong, it was really bad.” Her jewelry went missing, and Alicia sold Gina’s engagement ring. Alicia and the boyfriend got tossed from the condo in which they were squatting, and ended up on the streets. Joe would bring her home, but she’d leave again for the guy, for the drugs. Once, Alicia woke up next to the dead body of a young girl with whom she’d shot up the previous night.

Right now the family’s letting Alicia stay in the home, allowing her to shoot up there as they prep for the intervention. And when the besieged Gina wearily gives her $80 to buy a bundle, Alicia coos, “Thank you, Mommy.”

“There’s nothing I love more than buying drugs for my child,” Gina bitterly replies.

More often, though, Alicia is the bitter one. At family dinner one night she says, “Everybody wanted to be close to me, and then as soon as they found out that I had a drug addiction, everybody was gone.” Joe Jr. gloomily spears manicotti and exhibits the passive anger of a second-gen codependent. “The best way to deal,” he says, “is just to keep it low.”

There are lots of images of tattered American flags and shabby streets with Manhattan shimmering in the distance. Alicia drives around with her friend Adonis—love the name, but the dude’s no good. They buy and smoke crack, since her dealer’s out of heroin.

Alicia’s eyes are dead yet cunning, her hair stringy, her skin mottled and sagging. She and her mother look like weary twins locked in an endless battle. While Alicia and Adonis are out scoring, the family tracks them on GPS. Gina shamefacedly notes that when drug addict kids die, parents are relieved. Poor Gina is at the end of her tether, and Joe gazes worriedly at his wife, pointing out that there’s only one day, just one more day ‘til the intervention.

Phew! This shit was wearing me down, too, so thank God good ol’ Jeff VanVonderen has arrived, with his kindly eyes and single fringe of white hair. He always reminds me of Peter Boyle in Young Frankenstein, in the best way possible. Jeff makes the family disclose the stuff they do for Alicia: take her in again and again, give her their car, their Amex card, buy her new wardrobes of clothing whenever she returns from the streets. He asks about “Grandma,” that Cookie full of arsenic who hasn’t bothered to show up. “That’s a three hour session,” mutters Gina’s tough brother Danny, who looks like he could chew iron and spit nails.

Danny’s pissed at the whole situation. He blames Gina and Joe for not being strict enough with Alicia, who he’s banned from his own life. Jeff says Danny gets it, and the family needs to be prepared to cut Alicia off from their enabling.

Gina is exhausted into numbness, muttering that if Alicia doesn’t agree to rehab, she doesn’t know what she’ll do.

Meanwhile, Alicia’s lifted more quality hair products and is driving to Brooklyn to sell them to a salon. She’s so fucked up that the producers pull her over, rather disingenuously saying they hadn’t realized she’d gotten high before driving.

The next day. Alicia’s herded into a van, feeling “dope sick and regular sick, too.” Cut to Jeff telling the nervous family not to answer questions Alicia doesn’t ask. Keep it simple, folks. Joe stands. Everybody waits. Pin-drop tension.

Alicia struggles out of the van, hauling about three bags (Redken? Or Aveda?) and wearing the garb of the stoned and weary: torn jeans, velour hoodie. Her hair is wild, her eyes are angry as she walks into the room and sees Joe standing there, with Jeff and the family behind him.

BOOM! This intervention is on.

Gina reads her letter, talking about Alicia’s secrets and her thievery, her uselessness at the office and indifference to anybody’s happiness. I don’t really know what Gina means by Alicia’s “secrets,” since the girl happily bitches about her addiction at the dinner table and shoots up in the family biz break room.

When Gina finishes her letter, Alicia shrugs. “Is that it, are you done?”

Not quite, because here the noble Joe pipes up. He says if Alicia doesn’t go to detox and rehab, they will cut her off from their house, her phone and her car. This is a hit, a palpable hit. Alicia’s head tilts back and her mouth tightens at an angle. She looks like a Frenchwoman who’s just been sold a bad melon.

“I was set up and lied to and then brought to a place where everybody jumps on me and says you have to go right now this minute,” she says. It’s not an inaccurate summary, but she’s stuck and she knows it.

“Do you have an answer?” Jeff asks. “There’s a treatment center in Texas. It’s gorgeous. Do we need to read more letters?”

The family’s stunned at this swift capitulation. Gina wrings her hands, stating, “I’m relieved but I won’t breathe ‘til she’s on that plane.” Even Uncle Danny softens up, and looks like he won’t put anyone into a cement raincoat today. Alicia’s placed in a van, shaking from withdrawal or rage or both. A nurse leans over her. A plane takes off. Within it Alicia sleeps a drugged sleep, her mouth open like a baby bird’s.

My fave part of this show is seeing how they look after—and there has rarely been a bigger transformation than Alicia’s. After 60 days at BRC Recovery in Austin, Texas, she looks like a gorgeous milkmaid. She’s just had a very fetching haircut (bangs), her skin is tight and glowing, her face round and flushed. And her eyes sparkle—Goddamn it, there’s someone in there, and she’s freaking lovely! I want to hang with her and eat melted cheese toast.

There is no higher accolade I can confer.

Gina and Joe haven’t seen Alicia in two months, and the sight of her lovely daughter astonishes Gina. “It’s like looking at her when she was a little girl.” In a therapy session, Alicia sweetly says she is so grateful to her two parents for this opportunity and she doesn’t want their relationship to be co-dependent. She just wants to be their daughter, to “talk and hang out and not want anything from you guys.” Joe weeps.

“I wake up every morning grateful to be happy,” continues Alicia. “And that you guys never turned your backs on me.”