Just now, while flicking Jungle Red fingernails through the spammed questions I receive for this blog, I noticed the sort of query I usually relish (since it would lead us straight to Kenneth Anger territory– I am worryingly familiar with that dirty turf).   The question was: “Could you tell me more about classic Hollywood’s grubby underbelly?”

Why yes, friend, I could.  I absolutely could be a tour guide though Hollywood Babylon, leading you by your soft hand as we stroll by the “Hollywood” sign, where Peg Entwhistle jumped from the “H” to her death in 1932.  Then we’d wander near the house David Niven and Errol Flynn shared, which some wag* nicknamed “Cirrhosis by-the Sea.”  I could talk about Harlow’s Hubby’s death dildo and Jeff Chandler’s yen to wear polka-dot dresses.  Or about how Bogart used to hide under tables while his wife Mayo got into bar fights.  I could talk about all kinds of salacious useless crap, and quite often do.

But, dear reader, not today.  Today my nails are sharp but my spirit is yielding. Today I choose not to focus on the weary negativities of life, the injustices, imbalances, and the thrush-inducing mornings-after the night before.  So I won’t do a tour of syphilitic Hollywood, and not only because that’d be one lo-ong essay to write of a lovely October day.

Today I want to talk about lighter and rarer things than a rollicking dose of the clap.  Instead I want to discuss a truly great comic performance:  A great Female comic performance that is more balls-to-the wall than any other piece of acting in that annus mirabilis of 1939, and which should’ve put all that sexist nonsense about “Are Women Funny” to rest before WWII.  As if Mabel Normand herself didn’t do it decades before. . .

I’m talking about Rosalind Russell as Sylvia Fowler in The Women.  If you haven’t yet seen this film, all I can say is Goddamn you are lucky to have it in your future.  If you have, here’s a little recap for you:

So what makes a great comic performance?  A good comic performance is of course funny and compelling, timely and easeful.  A truly great comic performance, to me, is funny, timeless, and contains a profound unease, a bone-deep sense of not belonging.  It not only brings an enlivening chaos but also an almost palpable sense of release.  Release from convention, from cliché, from the weight of stereotype and other forms of lazy thinking.  These performances make us wish we had the nerve to be that alive, so abandoned, so blissfully subversive of expectations.

Unlike some of the other actresses I’ve written about here, Roz Russell was no one’s tragic figure.  Born with a patrician beauty and a gangling body, in Hollywood she found herself swathed in gauze and repeatedly playing thankless “Ladylike” roles.  Here’s Roz on her career in 1936: 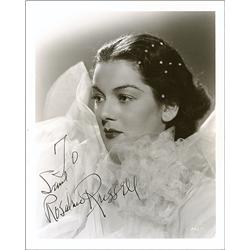 “Being typed as a lady is the greatest misfortune possible to a motion picture actress. It limits your characterizations, confines you to play feminine sops and menaces. . . when you strut onto the screen with beautiful clothes and charming manners, the most naive of theatergoers senses immediately that you are in a position to do the hero no good. . . I am tired of being a clothes horse — a sort of hothouse orchid in a stand of wild flowers.”

It was all about to change for Rosalind Russell.  Her performance in The Women brought her top-tier status, the kind of respect for her comedy chops that only Carole Lombard was getting. . .and a handsome husband from overseas who recognized value in her comic daring.

Roz Russell had started out at Universal, where she was ignored and maltreated–she was too tall, too eager, her beauty wasn’t of the chocolate box variety.  She always could wear clothes with the best of them, but something about the way she wore them told you that she found hats and bracelets fussy, and she wasn’t too crazy about gloves either.  She left Universal to sign with MGM as their choice recipient of the (ladylike) roles that Myrna Loy refused.

They had no idea how determined Russell was to cast the ladylike crap aside.  She auditioned five times for the role of Sylvia Fowler, against everybody’s advice. When Russell was finally cast in the The Women, starring Norma Shearer and Joan Crawford, no one was worried about her stealing the film–how could she with MGM’s two grande dames battling it out on screen?  Crawford loathed Shearer for her aristocratic posturing, and Shearer resented Crawford’s meretricious charms and public popularity.  In fact, these two spent so much time circling each other that they neglected to notice how George Cukor was not only allowing but encouraging Russell to play all of her scenes with a broad hand-flapping, turban-thumping relish that was blowing the other performances out of the water.

Did they not watch the dailies?  Someone was, namely Russell herself.  She knew this was her big chance to get out of that Second-Tier Lady-Ghetto, and she played hardball.  After enough of the film had been shot to prevent a shut-down, Russell called in sick.  And she kept calling in sick until her agent (Myron O’Selznick) pointed out to L.B. Mayer that he believed Russell was suffering from a chronic case of Low Billing.  Perhaps if her name joined Crawford’s and Shearer’s over the title, she might feel a little better. . .?

And so it was–Russell now had equal billing. Her character wore Schiaparelli eyes glued to her chest and shoe-shaped hats plopped on her head to make her even taller, skinnier, weirder looking.  During an exercise scene she lay on the ground and waggled her legs about like an upturned beetle, all the while gossiping and rolling her enormous eyes until it they seemed to send out sparks.  Add some chewing gum, that turban, a few clacketing knitting needles– and even complacent grande dame Norma Shearer knew she was in trouble.

Norma Shearer up against Rosalind Russell

But it was too late.  The greatness of Russell’s performance is in her eschewal of complacancies.  It’s in her determined undermining of any concept of ladylike demeanor.  She kicks chairs aside with the casualness of an inebriated cowboy. Her eyes bulge with curiosity and venom, her hands flap with excitement, worry, and violent energy.  Her body tilts forward and back with the unvarnished joy of being privileged, healthy, and full of piss and vinegar. Who can ask for anything more?

And if Schiaparelli eyeballs + studio back lot intrigues don’t draw you in, you’ve still got to see the catfight amongst the divorcees in Reno.  My favorite moment is absolutely when Russell catches sight of Paulette Goddard’s bare thigh–she eyes the lean, toned limb like a plump nun gazing at a holy wafer.  Then, slowly, with those wild eyes sparking, Russell licks her lips and. . . .CHOMP.

A few months later, Russell’s future husband was on a ship leaving England at the beginning of WWII.  The only film the ship showed was The Women–so poor Freddie Brisson sat through that film twice a day for a week, watching Rosalind Russell flap her mouth and squawk. 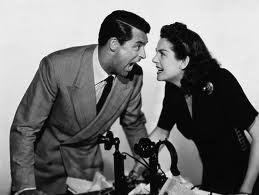 “I told you, I want you to meet a friend of mine!”
“I already said OKAY, Godammit!”

To his eternal credit, he was very very intrigued. And he just happened to be on his way to visit his pal (and future best man) Cary Grant, who was currently shooting His Gal Friday with Russell.  She and Brisson were married for 35 years, until Russell’s death in 1976.  In 1941 Rosalind Russell became a mother, and let it be noted that her son neither went to prison nor wrote a tell-all book about Russell.  This, and the fact that her husband happily referred to himself as “The Lizard of Roz,” makes me bet that, actually, she was a hell of a lady.

*The wag who named Niven and Flynn’s abode of broads, bourbon, and bad-boy behavior was none other than the seaside home’s original owner, Rosalind Russell.