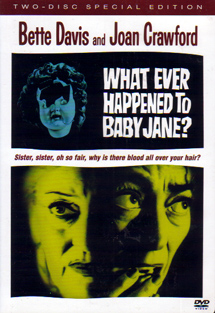 Is a Remake Sacriligious? Even if it gives us more Crazy to Love?

So it’s official, and has been for a month or so.  Whatever Happened to “Baby Jane”?  It’s Getting a Remake.  Which seemed to me to be one of the silliest decisions I’ve encountered since Hollywood tried to remake The Women and ended up pouring bong water over the embers of Meg Ryan’s career.

But naturally they’re at it again.  It’s clear they’ll never learn, because here’s a little sample of Hollywood logic for you:  “The idea is to make a modern film without modernizing the period.  It needs to resonate the golden age of Hollywood.”  These words were uttered by Walter Hill, who was chosen to be the director of this remake.  The man is doubtless an artist, whose upcoming Stallone film, Bullet to the Head, will rival Grand Illusion for delicacy and depth.  How the hell could anything resonate the golden age of Hollywood more thoroughly than Bette Davis impaling herself on Joan Crawford’s falsies, before kicking her to the head?